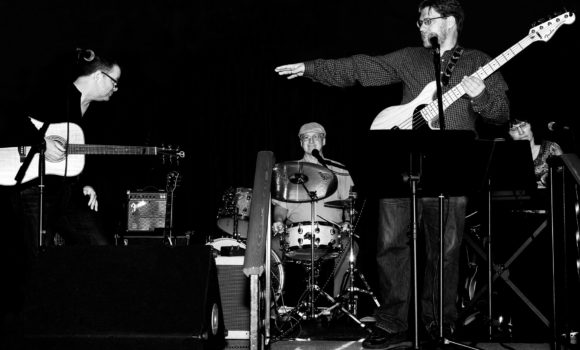 First there was a septet, then came one more.

The Bandmakers Fall 2016 first week saw the formation of a single seven-piece band. Within days, an eighth person joined up and everyone decided to go with two quartets instead of an octet. Although the splitting was done primarily on the basis of individuals’ work schedules, both quartets were lucky enough to find themselves with a girl singer and a drummer, which doesn’t always happen.

The Early Birds’song selection was a mix of member favorites, things that offered an interesting challenge, and ‘I bet nobody’s heard this before.’ Dano Ehler, who’d never played in public or in an ensemble before, bravely took the front man role at the top of the set with a relaxed version of the Marshall Tucker Band’s Can’t You See?. Short Change Hero (The Heavy) was suggested by the youngest member of the group, which seems appropriate as it comes from a video game. This song had a lot going on, including multi-part vocals and dynamic rhythmic and mood changes throughout.

After two slow songs, the group woke up the crowd with a rousing rendition of Folsom Prison Blues (Johnny Cash) with some rhythmic changes to spice things up. The relaxed atmpsphere returned with Harvest Moon (Neil Young), featuring excellent vocals by Don Tornquist and Nancy Brewer’s debut on harmonica in addition to some tasteful piano licks. Drummer Dave Haupt added a new skill, working with brushes for the first time.

Orphan Girl (Gillian Welch) was all Nancy; her voice and mandolin carrying this delightful song to the audience’s ears. Amazing Grace was presented with a change in tempo that came off nearly perfect, which led to a great deal of on-stage grinning and laughing. Knockin’ on Heaven’s Door (Bob Dylan) and Wagon Wheel (Dylan, then Old Crow Medicine Show) gave the audience some great familiar tunes before a big finish with the little-known novelty number You Call It Joggin’, presented in the Jimmy Buffet arrangement.

The band returned to the stage to join The Cacophonauts for Raspberry Jam, a jazzy instrumental written by Don in honor of his mom’s tasty preserves.

After ten weeks of practice, the band felt not so much like four musicians collaborating as it did a new group of friends who look forward to each other’s companionship every week…and hopefully more in the future.