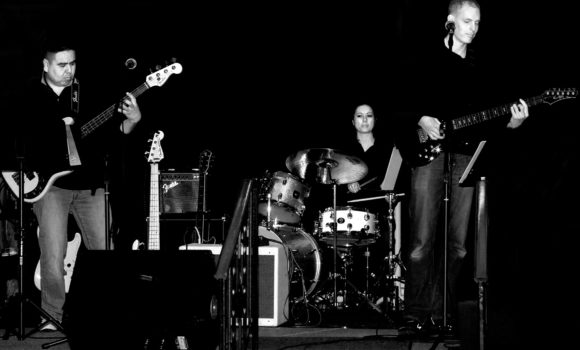 The Cacophonauts put it all together during the Fall 2016 term of Bandmakers as a quartet, after last-minute additions changed the term from 7 to 8 participants and it was decided to create 2 quartets instead of an octet.

Their set was an interesting mix of well-known songs, less-known songs, and even five original songs written by various band members!

Todd McPherren opened the set by singing Amblance Ltd.’s New English and later rocked out on Frantz Ferdinand’s Eleanor Put You Boots Back On.

Juan De La Cruz sang his original song, Amarti Asi, an up-tempo Spanish-language song about a sweetheart during which he played a great guitar solo.

Jim Larson sang three songs that he wrote: There Ought To Be An App for That, which explains that men need an app to interpret what women mean; A Dog’s Life, a story about a bouncy and carefree Golden Retrieve who lost a leg and yet remained bouncy and carefree; and How the Moose Got Its Antlers, a story inspired by questions asked by 4-year olds. As a bonus, the same story also explained how the camel got its humps.

The Fall 2016 set included guest appearances from two members of The Early Birds (the other band this term).  Dave Haupt sat in on drums to allow Melanie to play guitar on Pretty Thing, and Don Tornquist joined Juan for some great backup vocals on Amarti Asi. Don’s not being able to speak Spanish didn’t deter him from turning in a great performance, and he was most diplomatic in deflecting comments relating to Abba.

Both bands combined at the end of the show to play Raspberry Jam, a fun and funky instrumental written by Don in honor of his mom’s preserves.